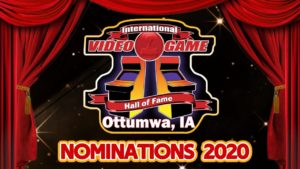 Thank you for your interest in submitting a nomination to our 2020 International Video Game Hall of Fame. In order to make the submissions as uniform as possible and to maintain the integrity of the IVGHOF, please review the following suggestions, categories, and background information prior to submitting your nomination.

Honoring the Greatness of Video Games and Preserving their Artifacts

The Board of Directors respectfully requests nominations for candidates to be considered for induction into the International Video Game Hall of Fame Class of 2020.

Community Action Award – Community action changes people’s lives for the better, embodies the spirit of hope and improves communities. The recipient of this award has demonstrated their dedication to that purpose.

Walter Day Lifetime Achievement Award – This award honors individuals that have served the electronic gaming industry over the course of a long career, enriching the industry with their contributions, strong leadership, and creative vision.

A Submitter may nominate any number of Nominees to as many categories as they like.

Nominees may be from any country and must be notable Players, Developers, Video Games and Industry leaders.

Nominees may be excluded from consideration based on the IVGHOF Code of Ethics.

The nomination deadline for the Class of 2020 Induction is February 29th, 2020