“Rock the Rock” $25,000 SEGA World Champion as broadcast worldwide on

– As a cosplayer, winner of over 40 awards at competitions and events.

– City Champion of Los Angeles in the Nintendo World Championships in

II Tournament, held on May 30, 1991 at Sunnyvale Golfland, the original

site of the eSports tournament series now known as “EVO”.

high score contest winner, and many others.

– As a cosplayer, winner of over 40 awards at various events and

competitions including Best in Show at Wondercon and Best Craftsmanship 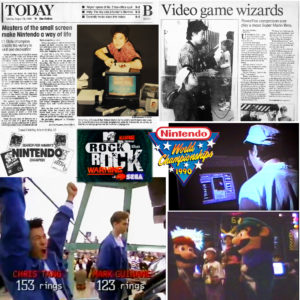 – At 14, began working at Atari Games/Tengen on games such as “Gauntlet

IV”, “Rampart”, and the unreleased “Cyberstorm”  for which he designed

the first use of a combo meter in a video game, which was copied by

Capcom and used in Super Street Fighter II and countless games since.

play and characters, writing the lore and story for the franchise used

for action figures, books and comics.

-Worked at Capcom on fan-favorite hits such as “Street Fighter III: 3rd

– Featured in films such as the award-winning “Ecstasy of Order: The

Tetris Masters” and “Gamer Age”, and on the HBO TV series “Entourage”.

– a dream come true since reading of their adventures and positive

mission throughout the 80’s.

– eSports commentator: advisor and finals announcer of the Classic

Tetris World Championship since 2010, and the voice of the “BOOM! Tetris

– working with other former Atari veterans on the upcoming game